Yep – it’s true….this really happened. At least I think it did. I’ve told the story so often I can’t remember if it really did happen…or if it happened to me…or if it happened to my sister Jeanne. At any rate, it’s a funny story and is a great segue to today’s topic: Why do some of our Samuel relatives have an ‘s’ on their name and others don’t? Read on to find out…….

Apparently, this is a question that baffles most of us doing genealogy research on the SAMUEL name. I found  posts in several genealogy forums seeking the answer. Here are some examples from our own family:

Even more perplexing than “now you see it (the ‘s’) now you don’t” is this headstone:

This is the headstone for my 3rd great-grandfather, Aaron Samuel and his wife, the former Phoebe Levy.
Aaron and Phoebe emigrated to America in 1857 with their 8 children. Their youngest, John, was only 9 months old when they began their journey. John would become my 2nd great-grandfather.

Notice that when Aaron was buried, there was no ‘s’ added to his name either on the stone or base. Nor was an ‘s’ added to Phoebe’s name when Aaron was buried in 1887. So, why would an ‘s’ be added upon Phoebe’s death in 1903? Did they all of a sudden have more money and could now afford the extra letter? (just kidding….really can’t think of a single reason why that would occur.)

I did find that there was an ‘s added to their surname on the 1857 passenger list as well as on the 1860 US Census.

Aaron and Phoebe are in good company at Washington Cemetery. Also buried there is the 8th of their 12 children, John Samuel. (Believe it or not – Aaron and Phoebe had 4 more children in America!)

Check out the names on this headstone: 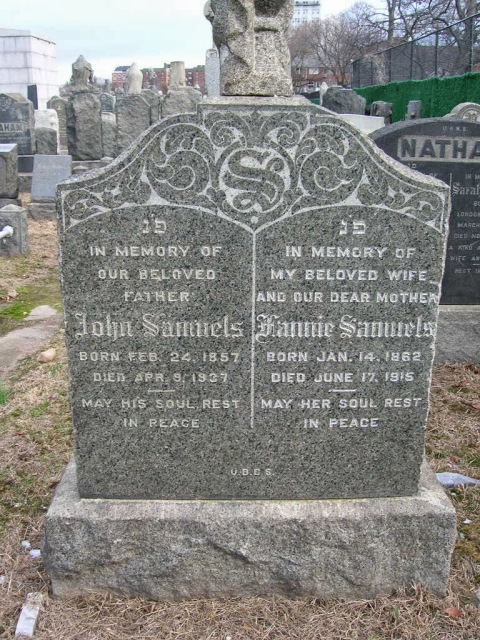 Of course, the only way to be sure of how someone spells their name is to see their actual signature. An entry on a local census or a draft registration form completed by a public official is not sufficient proof. That research will take more time than I currently have, but at some point (June 2104 if I’m lucky!) I’ll be retired and can focus on that particular issue.


Oh! Wait….I do have a document with signatures on it!!! I have a copy of John and Fanny’s marriage certificate. Check it out…..

Besides the fact that John’s name is listed as Jacob (Hebrew name maybe??) we have a bigger problem…..HE DIDN’T WRITE HIS OWN NAME!!! Was he illiterate? No answers for us here…just more questions – and perhaps a little more insight into the life of John Samuel.

So the answer to question: Why do some of our Samuel relatives have an ‘s’ on their name and others don’t? We will probably NEVER know!!!

Pot roast with Nöcken!!!
Saw this on another FB page and just had to share it!!
The last cookie😢
Happy New Year to my friends and family!! Posting now because I’m pretty sure I’ll be asleep by 9!!
Morning conversation with four-year-old: I’m gonna make a ‘vention for people who can’t sit on the potty to poop. I’ll take a tube and put it up there and the poop will go into the toilet.
Mom, ten years ago you said, “I had a job to do and I did it.” Then you asked if it was okay if you left us. Tough question to answer. But, you did your job well. You prepared us for life without you. I still have those moments when the phone rings and I think it’s you. Or when I think, “Oh, I have to tell Mom!” We miss you EVERY DAY. Keep watching over us❤️❤️