Emanuel (Mandl) Weiss was born on September 28, 1826 in Hungary. He is my second great-grandfather on my mother’s side.
Almost nothing is known about him at this time. In question is the number of marriages he may have had. His daughter Sophie alluded to the fact that Emanuel’s son Josef, may have been her half-brother. (As related to me by my mother, Sophie’s granddaughter) This story warrants further investigation as Emanuel and Theresia were married in 1860, four years previous to Josef’s birth, so why wouldn’t he have been a FULL brother?
The marriage of Emanuel and Theresia has been documented as being held at The Great Leopoldstadt Temple, which was also known as “Templgasse”. This temple, the largest synagogue in Austria at the time, was destroyed on Kristallnacht in 1938.

For now, we will settle on the following:
Emanuel had three children: Josef (b. August 30, 1864), Rosa (b. Sept. 1868) and Sofie (b. June 15, 1874.) Both girls were born in Weiner Neustadt, a town located just south of Vienna. This town was also called Bécsújhely (Bécs) and was on the Austrian/Hungarian border. 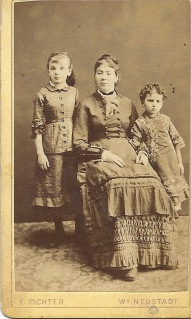 I have been unable to locate a picture of Emanuel, nor any documentation of his family’s life together. At left is a picture of Theresia with her daughters, Rosa (left) and Sophie (right) . Sophie’s face should look familiar to anyone who knew my mom, Doris. As children, Doris, her mom Rose, and grandmother, Sophie bore a striking resemblance to each other! Look at the pics below…..wouldn’t you agree?

Emanuel’s  last known address was in Weiner Neustadt at Am Kanal 1. At that time, Emanuel was working in a pipe-producing shop (Smoking or iron tube? Don’t know!) He was married to Theresia at this time. Theresia was a hairdresser who owned her own shop. (This information was provided to me by Traude, who located it in the book ­­Das Juesische Weiner Newstadtwritten by Dr. Werner Sulzgruber.)
Traude forwarded my request for information to Dr. Sulzgruber, who provided me with more information about my second great-grandfather. Dr. Salzgruber verified Emanuel’s birth and death dates, as well as the cause of death. Additionally, he informed me that at his death, Emanuel was a widower, so Theresia must have died before 1897. Dr. Salzgruber also verified the existence of Josef Weiss, who eventually married a woman named Emilia. He became a “doctor of medicine”. Josef and Emilia had at least one child, Wilhelm Franz Weiss, born 1903.
Emanuel died on May 5, 1897 of stomach cancer in Wr. Neustadt.  He is buried at Grabstelle Friedhof . The picture to the right was provided by Traude Triebel, who manages the website www.grave-pictures.at. Her data is now also part of the vast information that can be found at  www.genteam.at
Barely readable on the headstone is:  Weiss Emanuel, geb. 28.09.1826 – gest. 05.05.1897 “geb” (geborn) is German for “born”. “gest” (gestorben) is German for “died”.

Reading the markings on the headstone proved quite challenging so I enlisted some help from the wonderfully helpful members of JewishGen, a website “chock-full” of various databases related to Jewish genealogy. Within hours of posting my request, I received some clarifying information.
One helpful respondent used Photoshop to increase the contrast and was able to discern that Emanuel’s Hebrew name may be Lazar Menahkem Weiss. He also found that there was “…additional line in Roman letters below the last Hebrew line with the name EMANUEL WEISS. Below that are two lines in script. One has date- 28 or 29, probably Sept, 1826. Another date is in the next line- can’t make it out. There are at least two more lines inscribed in the base. I can only make out one word “KINDER” “

Guess I need to travel to Austria to see this for myself! Anyone up for a trip??

11 years. How is that possible? In my thoughts every day- your legacy continues to grow! Thanks for watching over us❤️❤️
#canvadesignchallenge Tweaked the subtitle font a bit
Chock full o'Nuts I don’t usually complain but thus really irritates me. Just opened fresh can and noticed it seemed less than usual. So I checked the label. 23 ounces. Still had the old can which is the EXACT SAME SIZE. Yup- it was 26 ounces. I knuw that doesn’t seem like a lot, but coffee doesn’t weigh very much. I just think that’s very misleading packaging. I get that they save money by using same can but maybe they could mark it better? Maybe: same can, same price, LESS coffee!🤦🏻‍♀️
#canvadesignchallenge Tentative cover of my forthcoming novel. Not sure why it cut off the top and bottom!
Halloween in Boulder!!
Happy 7th Birthday, Miss P! You keep us on our toes! Never lose your wonderful spirit!❤️❤️